The Keyboard. A digital frontier. I tried to picture clusters of information as they moved through the computer. What did they look like? Ships? Motorcycles? Were the circuits like freeways? I kept dreaming of a world I thought I’d never see. And then one day . . .

Following on from the reddit post where I got tonnes of good feedback and design ideas, came the actual product brainstorming. What did I want to achieve with this project, and who would actually buy it? And if they did buy it, what features would be the best to include, and what to omit? There was so much rambling through my head. And it was overwhelming. Especially as I have never done this before. But I loved it.

After hearing so many great ideas and possibilities, I had to scale back the project otherwise it would get too complicated. What did I want from this? Originally, as stated, I wanted a 60% with modules, and that’s what I set out to produce. I had to make sure the initial design was feasible before creating something of a masterpiece. Walk before run, right?

I had never used a 3D software package. So the first step was to change that. I already knew how to design keyboard layouts with KLE(link) and SwillKB(Link) so attaining the first layout design was pretty easy. I loaded up the default ISO 105 layout and cut the 60% right in half after people suggested split, which I love the idea of. Copied the raw data into Swill, and downloaded the .dxf file of the layout. Loaded it into Sketchup, pulled it by 10mm and tada! The first layout prototype. I wanted to get an understanding of how I needed these to connect, so having printable layout parts was the first step for me.

I spent a couple days sanding down the edges so they fit well, as well as placing switches and keycaps in place. It made me thoroughly enjoy how many layouts you could actually achieve with what was a very simple process so far. I started to think about how I could get these connected and the easiest option I could think of was magnets. I love the Palette Gear music device and really wanted to have that sort of compatibility and connection possibilies, but first I just wanted these damn things to connect properly.

Why not split the main section as well, for people who want split keyboards? 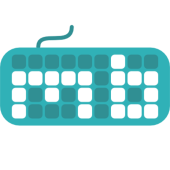 We’re back up and running!